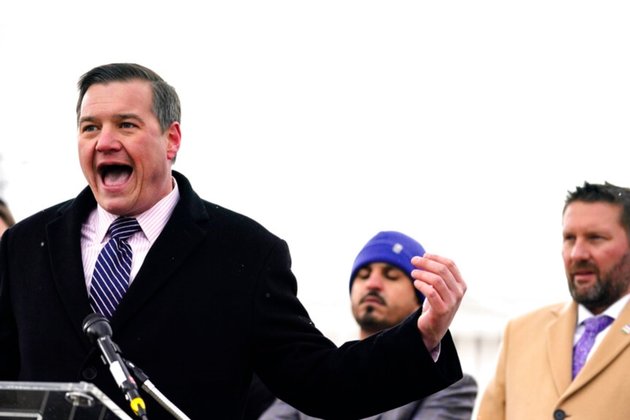 During the mayhem of his evacuation flight from Kabul last year, Sultan Ahmad was separated from his wife and his elderly mother.

'It was so chaotic, and women couldn't get through to the airport," Ahmad said, recalling events of August, when thousands of fearful Afghans rushed to Kabul airport to board U.S. military planes.

Over the past several months, as he received settlement assistance in the state of Virginia, Ahmad asked almost everyone for assistance to reunite his family with him.

"I fear for their safety and well-being in Afghanistan," the young Afghan man told VOA as he spoke about his wife and mother.

Their immediate reunification appears unlikely, if not impossible, partly because of Ahmad's temporary status in the U.S. and also because evacuation and resettlement programs for Afghans still remaining in Afghanistan have nearly stalled, according to refugee support organizations.

Last year, the U.S. government brought tens of thousands of Afghans to the U.S., most of them lacking travel documents, and offered them humanitarian paroles. 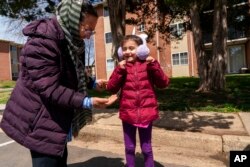 FILE - Asenat Safi, 4, reacts to a coin that her grandmother Fawzi Safi, 71, found outside the family's apartment in Alexandria, Va., April 11, 2022. The family was evacuated from Afghanistan and is trying to make a new life in the U.S., while in immigration limbo.

About 72,500 Afghan evacuees may be eligible for the TPS registration, the statement added.

The DHS announcement came days after the U.S. House of Representatives dropped a provision in the Ukraine support bill that sought a legal pathway for Afghan evacuees to become permanent residents. On Thursday, the Senate approved the bill without the Afghan provision.

Congress often puts changes into or rejects parts or all of a proposed bill.

Lawmakers' decision to remove the Afghan settlement provision from the Ukraine support bill, however, can also be a sign of eroding bipartisan support for Afghan evacuees, some advocates say.

"Unfortunately, it seems that the same rhetoric we hear about immigrants, any kind of immigrants, is what we're hearing about Afghans here, despite them having stood with us for years and years," Shawn VanDiver, a Navy veteran and founder of AfghanEvac, an umbrella organization supporting Afghan evacuees, told VOA.

The provision might have been dropped because it could be perceived as unrelated to the Ukraine support bill, which specifically asked for funding for the Ukraine's resistance against the Russian invasion, said Robert Law, director of regulatory affairs policy at the Center for Immigration Studies.

Last week, when asked what alternate avenues would be explored for the eventual settlement of Afghan evacuees, Jen Psaki, former White House press secretary, said, "We have been having conversations with congressional leadership about this - they are ongoing - on the best path forward for this and other priorities that were not included in the package."

But with the White House focused on the war in Ukraine and the lawmakers facing midterm elections in the next few months, experts say neither side will be interested in undertaking a new immigration bill for the Afghans.

FILE - Gulsom Esmaelzade, 35, right, sits with her sisters, Shoriya, 34, left, and Susan, 28, in a hotel room where Susan sleeps, May 4, 2022, in San Diego. The family has been shuttled among hotel rooms in the San Diego area since January, after spending three months at a New Jersey military base. 'We don't have anything back at home in Afghanistan and here we also don't have any future,' said Gulsom.

"I think the likely outcome for the next couple of years is going to be a continuation of the temporary parole," Law told VOA.

Since many of the Afghan evacuees do not fall under the established immigration programs such as the Special Immigration Visa, Congress will need to approve a new legal pathway for their permanent settlement.

"Our immigration laws, as they are currently structured, do not accommodate this type of population," said Law, adding that only those Afghans who have come to the U.S. through SIV or refugee programs "as defined by the law" have a path for permanent settlement.

U.S. officials have said Afghan nationals who qualify under the SIV program or whose life is at risk in Afghanistan because of their affiliation with the U.S. before the Taliban seized power will be helped to migrate to the U.S.

"We've worked intensely to evacuate and relocate Afghans who worked alongside us and are at particular risk of reprisal. We've gotten many out, but many are still there. We will keep working to help them. Our commitment to them has no deadline," U.S. Secretary of State, Anthony Blinken said August 30, when announcing the end of evacuation flights from Kabul.

It's unclear how many Afghans will be assisted to migrate to the U.S. under the SIV and a Priority-2 program in the future, but Afghans have reportedly submitted more than 45,000 applications for humanitarian parole entry into the U.S.

"The SIV program and P2 have been stalled, and we're also concerned for those Afghans who do not have a history of working with the U.S. government and may not be eligible for SIV or P2, including the 45,000-plus Afghans who have pursued humanitarian parole," Laila Ayub, an immigration attorney and a coordinator with Afghan Network of Advocacy and Resources, told VOA.

Like other Afghans who want to migrate to the U.S., Sultan Ahmad's wife and mother will need to travel to a third country and submit their applications. Their wait will be long because tens of thousands of applicants are already ahead in the line in neighboring Pakistan, and it's not clear if they will ever be issued visas.

OTTAWA, Canada: Over the next six years, Canada will spend $4.9 billion Canadian (US$3.8 billion) to modernize its aging military ...

Manila[Philippines], June 25 (ANI): The Philippines has terminated talks with China for a joint energy project in the South China ...

Dublin [Ireland], June 25 (ANI): The Indian Junior Women's Hockey Team is all set to take on the Netherlands in ...

Washington [US], June 25 (ANI): US President Joe Biden on Saturday signed into law a bipartisan gun safety bill in ... 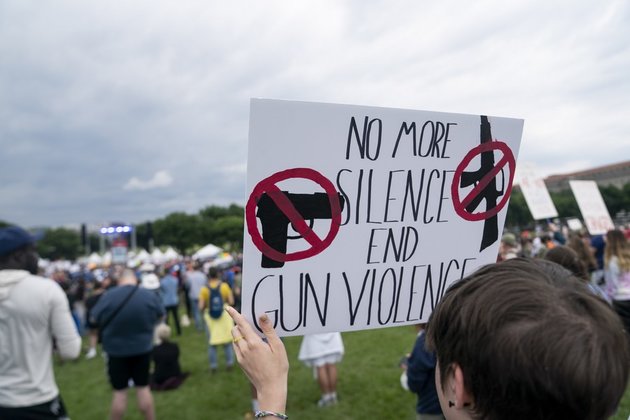 UK's Telegraph news block in Russia due to war coverage

MOSCOW, Russia: The UK newspaper, the Telegraph, has been blocked in Russia, following a request from the Russian prosecutor-general.The TASS ...

WASHINGTON, DC - U.S. President Joe Biden on Friday vowed to "do all in my power" to protect a woman's ...

PHNOM PENH, Cambodia: Cambodian villagers on the Mekong River have caught a stingray fish weighing 661 pounds, which is the ...