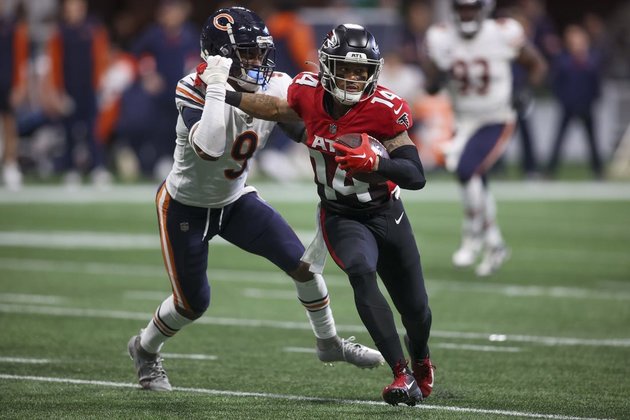 Younghoe Koo kicked a go-ahead 53-yard field goal late in the fourth quarter and Cordarrelle Patterson set an NFL record with his ninth career kickoff return for a touchdown to lift the host Atlanta Falcons to a 27-24 win over the Chicago Bears on Sunday.

Patterson pieced together several key runs to set up Koo, who split the uprights to cap a 12-play drive with 1:47 remaining in the fourth quarter.

Jaylinn Hawkins intercepted Justin Fields on the ensuing drive to seal the win for the Falcons (5-6), who snapped a two-game skid.

Atlanta's Marcus Mariota threw a 2-yard touchdown pass to rookie Drake London early in the first quarter and rushed for a 10-yard score late in the third.

Patterson etched his name into the record books with 4:18 remaining in the second quarter. He caught the ball three yards deep in the end zone and raced up the middle en route to a 103-yard return for a touchdown that trimmed Chicago's lead to 17-14.

Patterson shared the NFL record with Josh Cribbs and Leon Washington prior to the game.

Fields threw for 153 yards and a touchdown and rushed for 85 yards and a score for the Bears (3-8), who have lost four in a row and seven of their last eight games.

Mariota, who completed 13 of 20 passes for 131 yards, scrambled and found London in the left corner of the end zone to open the scoring at 9:37 of the first quarter.

Velus Jones Jr. took the ensuing kickoff 55 yards to set up Darnell Mooney's touchdown reception in the corner of the end zone.

Cairo Santos drilled a 41-yard field goal midway into the second quarter before Fields scampered around left end for a 4-yard score that gave the Bears a 17-7 lead. Fields' rushing touchdown was his seventh of the season.

Montgomery bullied his way in from 2 yards out to forge a 24-24 tie with 8:16 remaining in the fourth quarter.