No. 16 Virginia tops No. 19 Illinois on late run in Vegas 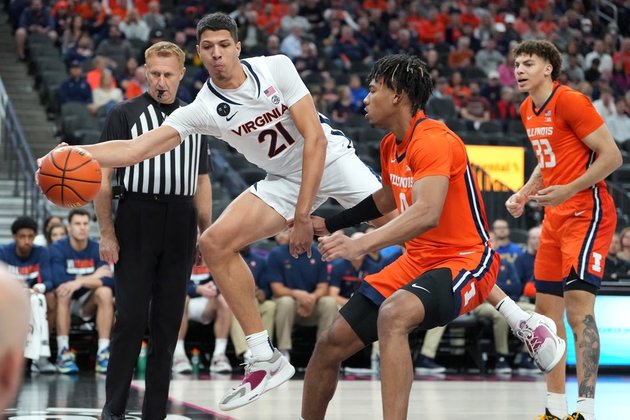 No. 16 Virginia scored 13 straight points in the final four minutes to claim a 70-61 victory over No. 19 Illinois in the Continental Tire Main Event championship Sunday afternoon in Las Vegas.

Reece Beckman scored eight of his game-high 17 points during the final 3:11 for Virginia (4-0). Kihei Clark and Jayden Gardner added 12 points apiece for the Cavaliers, who forced Illinois into five missed shots and three turnovers during the defining 13-0 run.

Virginia converted 25 of 32 free throws while Illinois hit just 4 of 9.

Clark drilled a 3-pointer and drove for a layup on Virginia's first two possessions to stake the Cavaliers to a 5-0 lead, but that was the biggest margin of the first half as both teams dug in defensively.

Virginia did its best to get the ball out of the hands of Shannon, who lit up UCLA for 29 points Friday night. Shannon didn't score until the 7:53 mark -- notching a layup off Hawkins' feed -- but he handed out five first-half assists.

When Shannon received a kind bounce on a 3-pointer with 1:00 left, he triggered the fifth lead change of the first half and staked Illinois to a 31-29 lead at the break.

Virginia came out energized in the second half and seized a 35-31 in the first 90 seconds. Clark drove and fed Gardner for a dunk, then Kadin Shedrick canned two free throws and slammed home a putback. That forced Illinois to take a timeout with 18:32 left.

Virginia took its biggest lead on back-to-back baskets by Armaan Franklin to make it 53-47 with 7:11 to go, but Epps drilled consecutive 3-pointers and Dain Dainja drove for a dunk to give Illinois its first lead since the opening minute of the half.

Illinois held a 58-56 edge with 3:38 to go, but Virginia reeled off its 13-0 run fueled by Beekman's steal and a drive for a three-point play. Beckman added another layup on the Cavaliers' next possession.