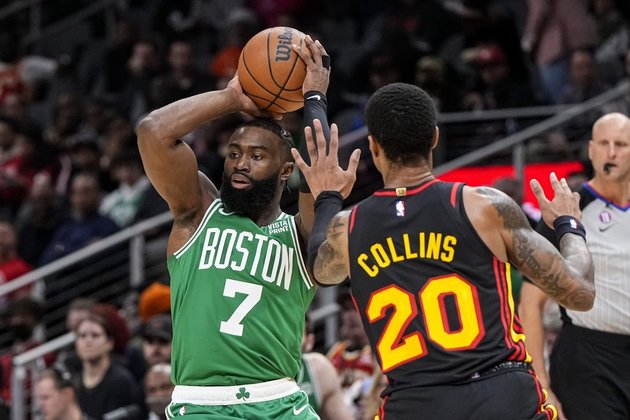 The Boston Celtics boast the NBA's best record and enter Monday's visit to the Chicago Bulls on a nine-game winning streak.

Boston's surge began at the expense of the Bulls, whom the Celtics defeated 123-119 on Nov. 4. The team has found its stride -- not to mention an even keel -- ever since."We can't try to look too far ahead and forget about all the details that need to be taken care of that's right in front of us," Boston's Jaylen Brown said. "Sometimes, we get a lead and we let the game get away from us, and that's the challenge, to be mature, to be locked in and be focused."

Chicago surely can attest to that last part.

After trailing by 19 points in the third quarter of Friday's game against the visiting Orlando Magic, the Bulls tied the game early in the fourth and grabbed the lead down the stretch.

Nikola Vucevic missed a pair of free throws with 12.2 seconds to go, however, and the Bulls lost an opportunity to extend the lead beyond two points. Orlando's Jalen Suggs took advantage, swishing a game-winning 3-pointer in the closing seconds to send Chicago to its fourth straight loss and sixth defeat in seven games.

While Vucevic shouldered the blame, Bulls leader DeMar DeRozan, who scored 41 points, stressed that Chicago needs to play better across the board.

"We can't put it merely on free throws," DeRozan said. "The margin of error when you're playing down 19 points is tough. Too much stuff's gotta go perfect.

"If we don't put ourselves in that hole, we can easily win a game without it coming down to free throws. Can't put that stress on him. Is what it is. Gonna bounce back though."

Monday begins a stretch that will see the Bulls play eight of their next 10 games against foes with records above .500.

Second-leading scorer Zach LaVine will aim to regroup after coach Billy Donovan benched him for the final 3:43 against Orlando as LaVine struggled to 1-for-14 shooting.

"That's Billy's decision. He gotta lay with it," LaVine said. "Do I agree with it? No. I think I can go out there and still be me even if I miss some shots. But that's his decision. He has to stand on it."

Boston drilled 20 3-pointers during Friday's 117-109 victory at New Orleans, including a 10-for-16 run from deep in the first quarter.

Jayson Tatum had a double-double of 19 points and 10 assists and Brown joined him with 27 points and 10 rebounds. Derrick White had 26 points while Al Horford scored 18.

Boston's slimmest margin of victory during the winning streak is three points, while its largest is 25.