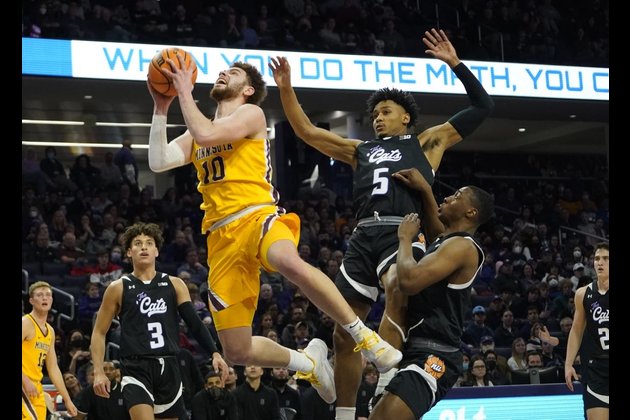 It's suspected that Minnesota could have one of the top 1-2 punches in the Big Ten Conference with Dawson Garcia and Jamison Battle.

That's because Battle hasn't played yet this year after undergoing foot surgery last month. The Golden Gophers are 3-1 without him and figure to be favored to beat Cal Baptist of Riverside, Calif., on Monday night at the SoCal Challenge in San Juan Capistrano, Calif.

But for Minnesota to consistently compete with the best teams in a good conference, Battle needs to be on the court and not be an unofficial assistant coach. He's the only member of the Big Ten's preseason all-conference team who hasn't played in a game this season.

"Obviously, when you have an all-league player, it just gives confidence to everybody," coach Ben Johnson said. "That's so important, especially earlier in the year when you've got three or four freshmen out there at the same time. Those guys probably need somebody to lean on to give them some confidence."

Garcia, who played at Marquette as a freshman and at North Carolina last season before coming back home for his junior year, is averaging 17.5 points and seven rebounds per game. But the Gophers are scoring just 63.5 points per game, which is last in the conference.

Meanwhile, the Lancers (3-1) are coming off their first win over a Power 5 program on Thursday night. They upset Washington 73-64 in Seattle, taking control with a 15-2 first-half run and leading for nearly 31 minutes.

Quintana is the team's leading scorer at 14.7 ppg, but Armstrong is the team's best player. He averages 14 points, 5.5 rebounds and five assists while toiling for nearly 34 minutes a game.